Over the pandemic, I bought quite a few books that sounded so interesting, many of them published between 2014-2022 as well as a number of books published pre-internet.

One particular historical nonfiction book (published in October 2020) enraged me so much due to the breathtaking amount of bad research and misinformation, I couldn’t take it anymore and stormed downstairs, threw it in the kitchen sink and poured yesterdays coffee over it. Once it was sufficiently saturated, I ripped out all the pages and threw the entire mess in the garbage.

Of those 60 plus books, I ended up keeping only the books that were published pre-internet, and put the rest on eBay.

Last night I finished wading through a massive three-ring genealogy binder jammed full of information I had not seen before. Much of it is xerox copies of cursive writing, which meant retraining my brain to read 19th century cursive writing again, much like reading a foreign language.

What’s left is double-checking six years of Itinerary notes from all my research trips and some other notes and then!!! My 3-foot-stack of 19th Civil War Leslie’s Illustrated magazines awaits. I am looking forward to jumping down the 1860s rabbit hole of the American Civil War for a few weeks, it’s all I’ve been looking forward to.

My plan is to publish three historical nonfiction narrative books, all of them based on the contents of my collection.

I am an autodidact, and I tend to avoid the academic world as much as possible. About 12 years ago I started researching the history of human preservation during the 1840s in Paris. It was while doing this research that I discovered the alluring world of arsenic.

Researching and writing about this subject has been my full-time job for about 7 years now. Next week, I am about to jump into the third draft of the first book, the second book is nearly completed and the third book I just need to take the photographs. The rest of this year will be focused on getting through the third draft. 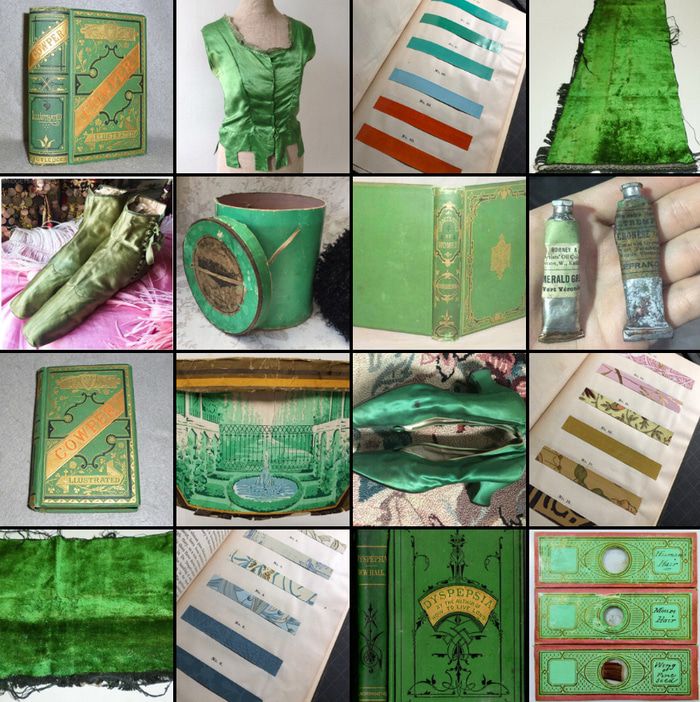 Above are just a few items from my Arsenic Collection

My Poison collection includes many arsenic-saturated Emerald Green papers and fabrics. This is just off the top of my head.

I was shocked when I realized it came with numerous tipped in arsenic wallpaper swatches! And after all these years, not a single one was missing. I was beyond thrilled! It reminds me of a mini “Shadows From the Walls of Death.”

Also tins of Paris Green. There is much more, I just can’t remember it all right now.

A few years ago I bought this wonderful vivid 19th c Emerald Green velvet and decided to use it for making doll dresses. I noticed after I had finished sewing one skirt that my hands were dry and itchy, and it felt like I had just come out of a dust storm. That night I felt much better and did not pick up the sewing again until a few days later. Once again, my hands were itchy, my eyes felt like sand-paper and my throat was itchy and dry. I realized it was the fabric and put it away. Later, when I discovered the history of Arsenic being used in fabric, I pulled it out and realized I was sewing with arsenic fabric. Other then that, that was the extent of my arsenic poisoning. 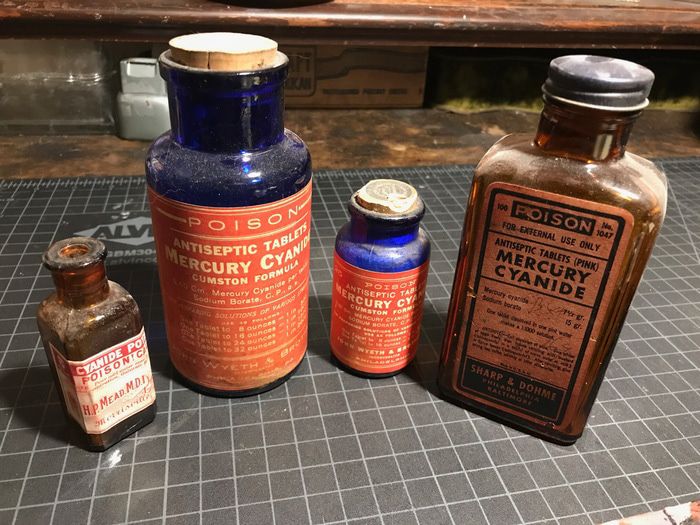 I have a smaller collection of 19th c surgical instruments, embalming syringes, hypodermic sets, dissection, amputation and embalming kits. The oldest kits I have are two complete, mint 1840s embalming kits from Paris.

One dissection curiosity is a set of 30 gold-plated numbered pins that were used by a wealthy medical student in London to mark the cadaver during dissection. Each pin has a number that corresponds with a number on a gold-plated cannula flag that is removed and the pin left in the cadaver.

I keep tight records of provenance, prices I paid, where the item came from, as well as the amazing histories about each of these items. Those are the stories I want to tell.

I have a million words I have to go through and cut. On a good day, I can cut 2000 words, and then on another good day, I cut only a paragraph but wrote 1500 words. This is all the research I did over the past 15 years and putting it all... Continue →