Monoculture: A single, homogeneous culture without diversity or dissension.
Noun. A group or society characterized by cultural uniformity.
This is the definition of the color beige.

Tribalism, toxic ideologies, labels and authoritarianism on both sides is killing off individuality, and Social Media is the accelerant. For the sake of your muse and the quality of your creative output, get the fuck off of social media.

Social Media is a cancer and has destroyed individualism and is toxic as hell for artists, writers and musicians, and let me also add that the entire book publishing industry is a joke and I refuse to be a part of it.

This is my punk roots screaming, we have to get back to being all about DIY and get away from being beholden to public opinion and big, faceless corporations. 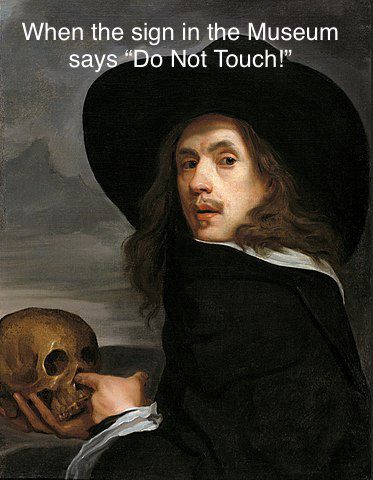 This was sent to me because hahaha I actually did this in a museum when I was but a wee kidlet and yes, I got yelled at.

The Book
I made it through the first 40 or so pages of the third draft. Oh boy. I realized going through it that there is so much I need to cut, what I thought might be important is no longer important.

I have one main theme that runs through the book from start to finish, I call it the main road. Sometimes I deviate and end up turning down some winding road and think, hey, this looks like something that could go in the book, it kind of sort of relates. And then last night as I was going through different section and re-reading it, I am thinking why the fuck is this in here and what was I thinking? Now with the third draft, I have to keep reminding myself to stay focused on the main road otherwise the theme is going to get lost or diluted because of a lot of other extracurricular activities going on that have no reason to be there.

During my break, I went through all those Leslie’s Illustrated and discovered something that needed to be added to this other chronological theme that runs through the book, which means redoing it all over again all throughout the book.

It has to do with a continuous myth about a place in NYC that never happened, it was all a case of mistaken identity and actually took place about five blocks away. When I popped in the original location address in Google maps, holy fuck. I had to wonder if there was some weird conspiracy, a cover up.

There is not a whole lot written about this location but there are old maps. When I researched this myth location, the dates don’t add up. And then when I was checking old NYC maps from the 19th century, there it was, on one map it was clearly marked, and then on another map it was not there. Instead it showed up five blocks away. The myth is coming from the first map, but looking at the second map, you realize oh, so that is where it was.

The actual location is a place where the last thing the owners would want is for the public to know what this place was originally used for. That is the conspiracy. Did the powers-that-be push the myth of the other location in order to avert peoples eyes and feelings as to what this place actually was? There is this shady feeling to it, especially considering what is currently sitting on the real location and who built it.

Where Flies are Born

I took a few days off of working on the book to ink posters and today I am back at it. The main working date for the book starts around the beginning of 1800 and ends around 1910-ish, but there are moments when it does venture into the... Continue →